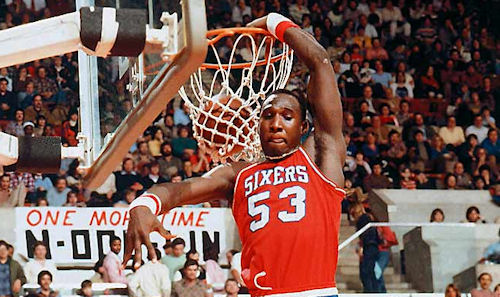 Darryl “Chocolate Thunder” Dawkins died Thursday at a hospital in Allentown, Pennsylvania, according to the Lehigh County coroner’s office. He was 58, and even though officials said an autopsy would be performed Friday, his family released a statement saying the cause of death was a heart attack: “It is with great sadness that we share the passing of our beloved husband and father, Darryl Dawkins, who succumbed today to a heart attack,” the statement reads. “Darryl touched the hearts and spirits of so many with his big smile and personality, ferocious dunks, but more than anything, his huge, loving heart.  His family, wife Janice, children Dara, Tabitha, Nicholas and Alexis, along with countless family, friends, and fans, all mourn his loss. More than anything Darryl accomplished in his basketball career as the inimitable ‘Chocolate Thunder,’ he was most proud of his role and responsibility as a husband and father. We ask that the public please respect our privacy as we grieve his loss.”

NBACommissioner Adam Silver said in a statement: “The NBA family is heartbroken by the sudden and tragic passing of Darryl Dawkins. We will always remember Darryl for his incredible talent, his infectious enthusiasm and his boundless generosity. He played the game with passion, integrity and joy, never forgetting how great an influence he had on his legions of fans, young and old.” A native of Orlando, Dawkins became the first player drafted to the NBA straight out of high school when he was selected by Philadelphia with the fifth pick of the 1975 draft. He appeared in three NBA Finals with the 76ers. In 14 NBA seasons, Dawkins averaged 12 points, 6.1 rebounds and 1.4 blocks per game. His final seasons were plagued by injury. After Dawkins retired from the NBA, he played briefly with the Harlem Globetrotters and entered coaching, with stops in the American Basketball Association, the United States Basketball League, and Lehigh Carbon Community College.