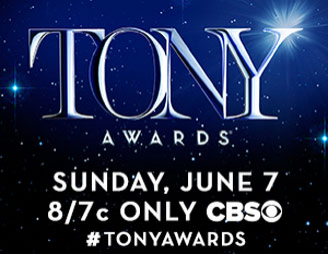 Performances have been announced for THE 69TH ANNUAL TONY AWARDS, live from Radio City Music Hall, Sunday, June 7 (8:00-11:00 PM, live ET/ delayed PT) on the CBS Television Network. The entertainment-packed evening will feature performances of the following numbers from the 2015 Tony-nominated shows in the Best Musical and Best Revival of a Musical categories:

"Getting to Know You" and "Shall We Dance?" from "The King and I,"featuring nominees Kelli O'Hara, Ken Watanabe and Ruthie Ann Miles.

"A Musical" featuring nominees Brian d'Arcy James, Brad Oscar and the cast of "Something Rotten!"

"Love and Love Alone" and "I Would Never Leave You," featuring nominee Chita Rivera and the cast of "The Visit."

A medley of "Lonely Town," "New York, New York," and "Times Square Ballet" featuring nominee Tony Yazbeck and the cast of "On the Town."

The show will feature a special performance by Josh Groban, who will be joined on stage by 175 performers – the most in Tony Award history.

Also, in celebration of its 10-year anniversary on Broadway, the Broadway cast of "Jersey Boys"will perform "Oh What a Night."

This year marks the 69th anniversary of the Tony Awards, which were first held on April 6, 1947 at the Waldorf Astoria's Grand Ballroom. The ceremony is presented by Tony Award Productions, which is a joint venture of The Broadway League and the American Theatre Wing, which founded the Tonys.

The 2013 Tony Awards broadcast was honored with three Primetime Emmy Awards in the categories of Outstanding Directing for a Variety Special, Outstanding Special Class Program and Outstanding Original Music and Lyrics for "Bigger!"

Ricky Kirshner and Glenn Weiss of White Cherry Entertainment will return as executive producers.  Weiss will also serve as director for the 16th consecutive year.