Syfy Greenlights "The Magicians" For 12 Episodes 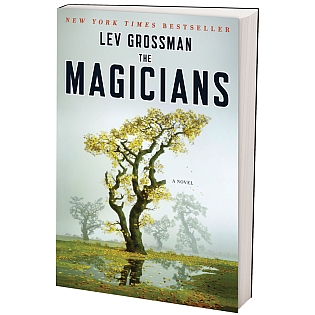 Syfy today announced it has greenlit The Magicians to series.

Based upon Lev Grossman’s best-selling books, The Magicians stars Jason Ralph (A Most Violent Year, Aquarius) as Quentin Coldwater, a brilliant grad student who enrolls in Brakebills College for Magical Pedagogy, a secret upstate New York university specializing in magic. He and his 20-something friends soon discover that the magical fantasy world they read about as children is all too real– and poses grave danger to humanity.

"The Magicians pilot beautifully delivers a world filled with wonder, fantasy and intrigue," said Dave Howe, President, Syfy. “We can’t wait to delve deeper into the lives of Quentin and his college friends, as they struggle with the enormity of their burgeoning powers – and unleash them upon the world.”

"Ever since ‘The Magicians’ was published I’ve wanted to see this story on screen,” said Lev Grossman. “The people, the school, the other worlds, the magic. I’m so thrilled that it’s finally happening, and I’m beyond thrilled that we found the right people to do it. Get ready; you’ve never seen anything like this."

“Lev is a visionary world-creator. It’s an awesome responsibility to honor the novels’ core audience and also to translate that vision to the screen,” said Jeff Wachtel, President and Chief Content Officer, NBCUniversal Cable Entertainment.  “We are lucky to have Sera Gamble, Michael London, John McNamara and Janice Williams as the team bringing this series to life.”

Lev Grossman’s “Magicians” trilogy is an international sensation, published and widely praised in more than twenty countries. The epic conclusion to the series, “The Magician’s Land,” opened at #1 last summer on the New York Times Hardcover Best Seller’s list, and was widely acclaimed as one of the best books of the year.

The twelve episode season will begin shooting in Vancouver in July.

Television
Baz Luhrmann Is Back With A Netflix Series