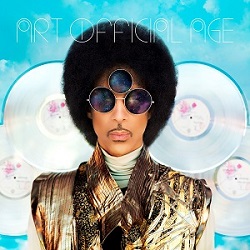 Prince will hold a live streaming album release party Tuesday through Live Nation and Yahoo. Both albums, which are sold separately, are now available via digital retailers and from http://www.artofficialage.com.

2014 has been one of the most exciting years yet for the prodigious musical talent. Together with 3RDEYEGIRL, he rocked UK and European audiences into a frenzy with his sell-out ‘Hit & Run’ tours, generating some of the most significant critical acclaim of his career so far.  In April, NPG Music Publishing was launched, marking the first time Prince’s vast publishing catalog has been independently controlled and administered in over twenty years.  All of this in addition to headlining and curating the Essence Festival on July 4th in New Orleans and a much talked about appearance on hit TV show ‘New Girl’.  2014 has underlined that Prince continues to innovate and surprise, thrilling his fans and welcoming a whole new audience in the process.

"Prince is one of just a handful of visionary artists who have truly reshaped and redefined modern music and culture,” said Warner Bros. Records Chairman & CEO Cameron Strang. “For the past 35 years, he has never stopped evolving, challenging himself, reinventing his sound, and pushing boundaries.  In true Prince fashion, he has just given us not one, but two extraordinary albums that express the incredible range and depth of his talent.  All of us at WBR are immensely proud to be working with Prince to bring this brilliant new music to his legions of fans around the world, and needless to say we are thrilled to be working in partnership with him again.”

In releasing two albums on the same day fans get the chance to savor the many different aspects of Prince’s musical talents with ‘ART OFFICIAL AGE’ and ‘PLECTRUMELECTRUM’ offering two very distinct listening experiences.