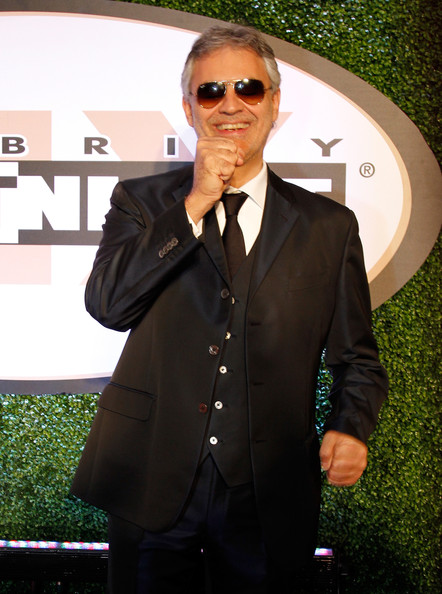 Andrea Bocelli brought one of the most successful charity events in the world to Italy, when Celebrity Fight Night left its hometown of Phoenix, AZ for the first time ever last week.  Celebrity Fight Night is a star-studded annual charity event presented in honor of its yearly special guest, Muhammad Ali, and has been long supported by Andrea Bocelli.  With this inaugural visit to Italy, Celebrity Fight Night eclipsed $100 million raised in its 20 year history, with the weekend’s event bringing in approximately $6 million.  Proceeds from the event are donated to the Muhammad Ali Parkinson Center at Barrow Neurological Institute in Phoenix, AZ and The Andrea Bocelli Foundation.

Celebrity Fight Night Foundation is a nonprofit organization that was founded in 1994 by Jimmy Walker to support the Muhammad Ali Parkinson Center at Barrow Neurological Institute in Phoenix, as well as numerous other charities. The Andrea Bocelli Foundation was created in 2011 to help people in need due to illness, poverty and social exclusion by promoting and supporting Italian national and international projects that support overcoming these barriers and full self-expression.

From September 3 to 7, 100 philanthropic donors and special guests were guided around Tuscany and treated to the very best arts, entertainment and culture in the region.

On September 4, donors attended the Teatro La Pergola, in Florence, where they were served a gourmet dinner and enjoyed a music and dance show of the Renaissance, sponsored by Stefano Ricci, historical and famous maison of Italian luxury fashion.

On September 5, at Forte Dei Marmi, Andrea Bocelli performed and honored Grammy-winning composer and producer David Foster, as well as Sophia Loren for her generosity and for her efforts as an Italian ambassador around the world. During the event, which was sponsored by Antico Setificio Fiorentino, Foster was be joined by Reba McEntire, Lionel Richie, John Legend and Ronnie Dunn for a special performance.

The charity trip ended on September 7, with a featured gala that was held in the historical Salone dei Cinquecento at the Palazzo Vecchio. Andrea and Veronica Bocelli presented the inaugural Andrea Bocelli Humanitarian Awards on stage to George Clooney and Lionel Richie, who both took to the stage to accept their honors.  Maestro Andrea Bocelli, along with the extraordinary orchestra of Maggio Musicale Fiorentino conducted by Maestro Zubin Mehta, headlined the evening of breathtaking entertainment, incredible auction, and fine cuisine.  The elegant décor was designed by the prestigious and refined hand of the Italian fashion brand, and event sponsor, Ermanno Scervino.

The auction, which raised nearly $1 million, was hosted by renowned auctioneer, Simon De Pury, and included exclusive items and celebrity experiences such as a dinner with Robert de Niro and Billy Crystal.