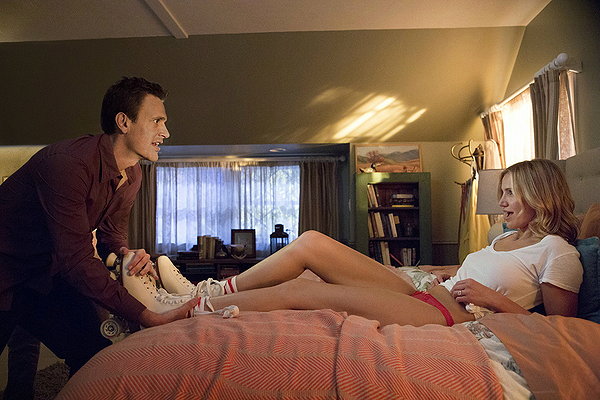 Cameron Diaz and Jason Segal reteam with their "Bad Teacher" director, Jake Kasdan in the raunchy comedy, "Sex Tape." Unfortunately, whatever charm and humor found in the adventures of the scheming teacher in their previous film did not follow the trio into their latest effort.

When Jay (Segal) and Annie (Diaz) first met there was an abundance of passion and sex, but it’s ten years later and the now married couple has two kids, responsibilities and a serious lack of activity in the bedroom. In order to break the rut, Annie plans a night of amorous deeds with her very willing husband. When at first it seems like the spark may be difficult to reignite, Annie gets the idea of making a sex tape in order to spice things up. Jay soon agrees and the two set about recreating every coital position in the book "The Joy of Sex." When the video is accidentally downloaded on “The Cloud” to some friends and acquaintances that the couple had given iPads to, Jay and Annie must go about trying to retrieve the devices in order to save themselves from the embarrassment of everyone seeing their naughty rendezvous. 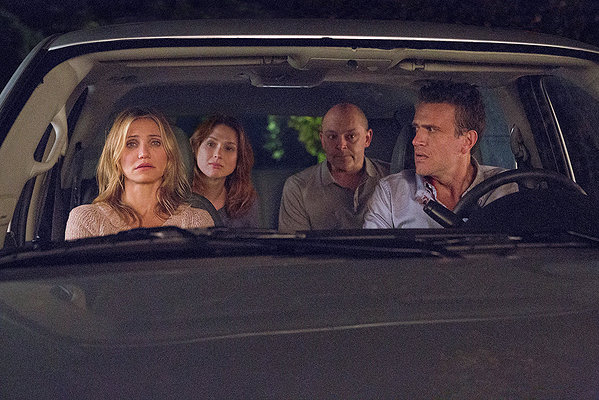 Firstly, even if they aren’t the most technologically savvy people in the world, the idea that these two seemingly intelligent adults can think of no other solution to this problem, but to go on a wacky adventure to track down these iPads is pretty far-fetched. This is addressed at one point, which only makes the goings-on seem more trivial. But that’s somewhat forgivable. It’s a comedy after all and wacky adventure is the name of the game. The biggest issue is with the story itself. The plot feels as out-of-touch as the cassette-based media source the title references. It sounds like a storyline from a mid-nineties sitcom. Surely “Friends”’ Ross and Rachel found themselves in the same predicament at some point.

The film tries to offset the antiquated feel by beefing up the raunch factor. However, the movie seems to want the sex alone to do all of the comedic work. As if seeing a well-known actors O-face was already funny enough and a joke wasn’t necessary. It’s all punch line and no set-up. The sex scenes lacked both comedy and sex-appeal. Maybe you don’t need both, but at least one would be appropriate for a sex comedy. 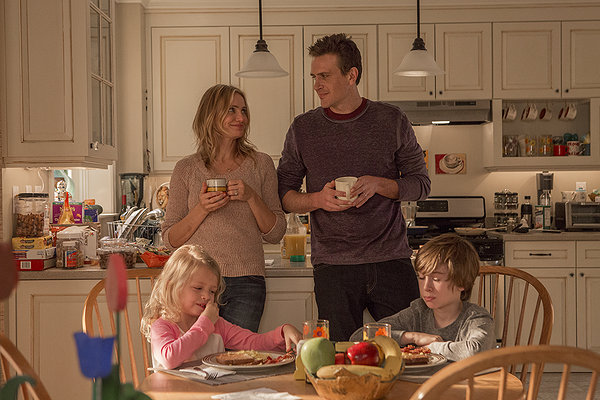 It’s especially disappointing given all of the talent that’s involved. The pleasant surprise that was Bad Teacher would seem enough to justify the regrouping, but it’s even more apparent when you look at the people involved individually. This year alone, Diaz has been in a movie with far more life and fun, "The Other Woman." Segal has proven himself to be an affable goof in movies like "Forgetting Sarah Marshall" and the television show "How I Met Your Mother." Moreover, Segal and his writing partner, Nicholas Stoller, rewrote the script from veteran writer, Kate Angelo, and the Segal / Stoller duo is responsible for some comedies that could already be considered classics like FSM and "The Muppets." Then there’s the director, Jake Kasdan, who besides Teacher, directed the cult classic "Walk Hard: The Dewey Cox Story" and whose debut film was the imminently watchable and deeply under-appreciated, "Zero Effect," which is highly recommend if you are a fan of detective fiction, comedy or general enjoyment.

So who knows exactly how the movie went astray. It could be any number of things. But the sad reality is, it did. There’s a common expression about sex that says, “even when it’s bad, it’s still good.” Well, if Sex Tape is any indication, the same cannot be said about sex comedies.