Winterberry Holly Perfect For The Holidays 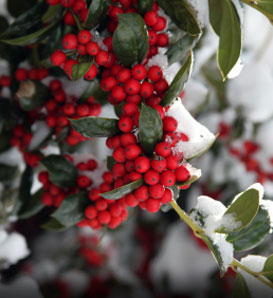 If you are, as I am, an enthusiast amateur gardener, landscaping becomes a challenge during the winter months especially in the Northeast. But there are plenty of plants and shrubs hardy enough which grow even in the snow.

One in particular is an attention grabber and a perfect fit for the holidays: (red) Winterberry Holly, (Ilex verticillata) also known as "black alder," "false alder" and "fever bush." It is found commonly in the eastern part of the United States and Canada. Winterberry shrubs love water, so the rain is not a problem, although they can be successfully cultivated in other areas by professional landscapers.

But if your landscape is plagued with lots of rain, it will be even better as it is the shrub's native predisposition. Winterberry holly love acidic soils and can grow in partial shade or full sun. Their height can reach anywhere between 3' to 15' tall, and their width also varies. The winterberry grows in the wild.

Lifestyle
'Tis The Season For Amaryllis