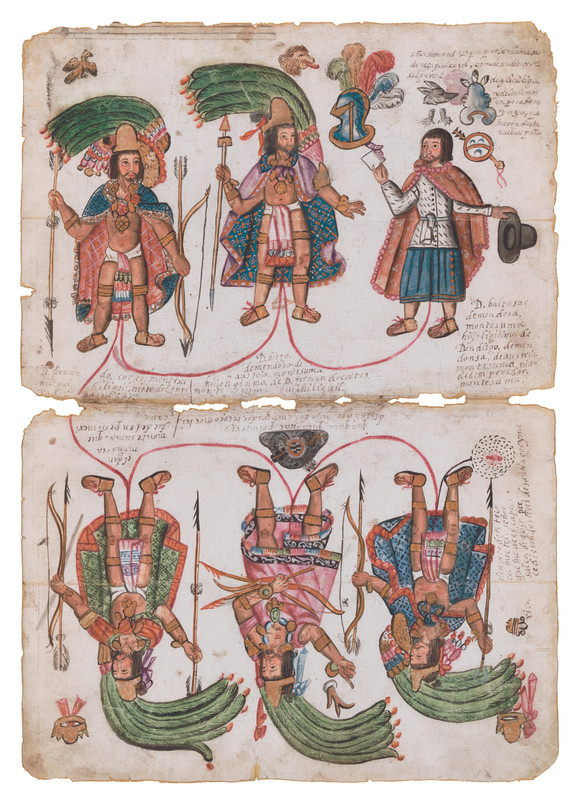 The Los Angeles County Museum of Art (LACMA) presents Mixpantli: Space, Time, and the Indigenous Origins of Mexico, coinciding with the 500th anniversary of the fall of the Aztec capital Tenochtitlan (modern-day Mexico City).

This exhibition subverts the traditional narrative of the conquest by centering the creative resilience of Indigenous artists, mapmakers, and storytellers who forged new futures and made their world anew through artistic practice. Nahua scribes and painters gave the name mixpantli, or “banner of clouds,” to the first omen of the conquest, depicting this omen as both a Mexica, or Aztec, battle standard and a Euro-Christian column enveloped in clouds.

Mixpantli, then, reflects the bringing together of both Nahua and Christian worldviews, and the efforts of Indigenous peoples to reorient space and time in a new world and era.

Featuring more than 30 works, Mixpantli is co-curated by Diana Magaloni.

“This exhibition creates an opportunity to re-examine traditional narratives of ‘conquest’, focusing instead on Indigenous Nahua artists and knowledge-keepers who tell a different story,” says Magaloni. “The show puts pre-Columbian and early colonial works in conversation to showcase the creative resilience of Nahua artists under Spanish rule and the centrality of Nahua worldview in shaping modern Mexico.”

Unique to the exhibition is a facsimile set of 16th- and 17th-century maps, originally crafted by Indigenous cartographers and reproduced for LACMA by Mexico City– based artist Tlaoli Ramírez Téllez. The original documents, housed in Mexico’s national archive and known as mapas de merced, were made to accompany legal petitions against royal land grants, documenting the long-standing relationships that Indigenous communities had with their lands. Mixpantli: Space, Time, and the Indigenous Origins of Mexico is joined by the companion exhibition Mixpantli: Contemporary Echoes (December 12, 2021–June 12, 2022), which showcases the lasting impact of Indigenous creative resilience and vibrant artistic traditions in contemporary Los Angeles and Mexico.