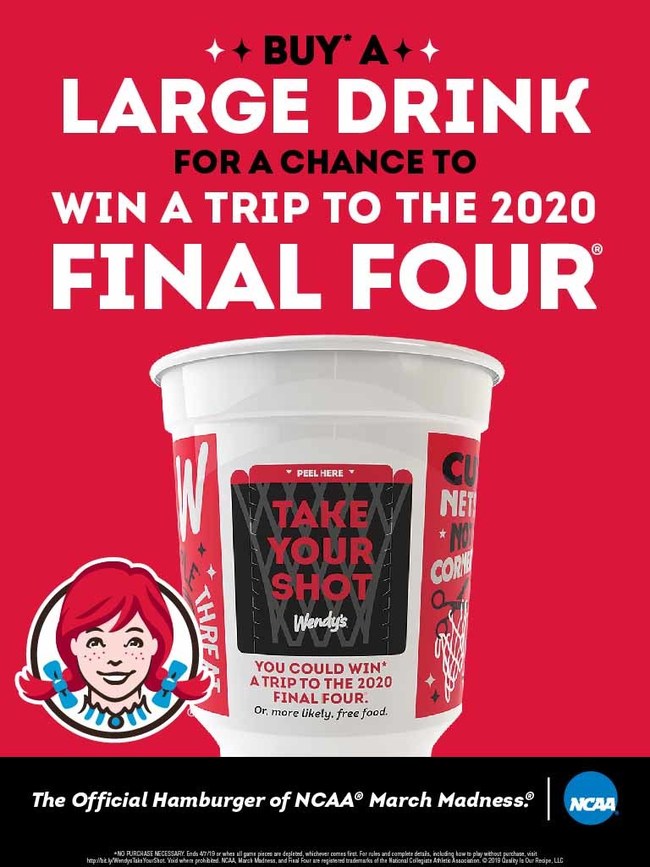 It's time for The Big Dance®, and Wendy's®, the Official Hamburger of the NCAA®, has big deals!

The countdown to March Madness® is ticking away, and basketball fans across the country are gearing up for the most exciting month of the year. Wendy's knows that being a fan can be tough – between filling out the perfect bracket to your team losing on a half-court buzzer beater. Whether your team wins or loses, Wendy's has your back all tournament long with great deals and prizes, including a chance to win a trip to the NCAA Men's Final Four® in 2020. More likely, free food, but we dare you to take your shot and go for the grand prize!

Starting today, March 11, through April 7*, Wendy's fans who purchase a cold, large drink will have a chance to win instant free food, $5 Wendy's mobile app credits for, you guessed it, more food, or a trip to Atlanta, Ga., for the Final Four in 2020. The "Take Your Shot" promotion runs through April 7*, so you'll want to get a couple of cold, large drinks as soon as possible to, you know, increase your odds. For Rules, free entry, possible earlier end date, prizes, odds, & full details, visit WendysTakeYourShot.com.

"As the Official Hamburger of the NCAA for the third consecutive year, we're kicking it up a notch and offering fans more value than ever before," said Kurt Kane, Wendy's executive vice president, chief concept and marketing officer. "We encourage all fans to get in on March Madness and 'Take Your Shot'. With plenty of prizes and promotions, Wendy's is keeping fans fueled all tournament long."

As the tournament progresses, Wendy's will continue to announce new mobile offers, so even if your team is eliminated, Wendy's will be right there to pick you back up. Download the Wendy's mobile app today and you won't miss one minute of the action.

Food & Drinks
Ice Cream With A Shot Of Espresso? Dunkin' Donuts & Baskin Robbins Are Doing It

Food & Drinks
Taste M&M's New Hazelnut Candies Before Everyone Else