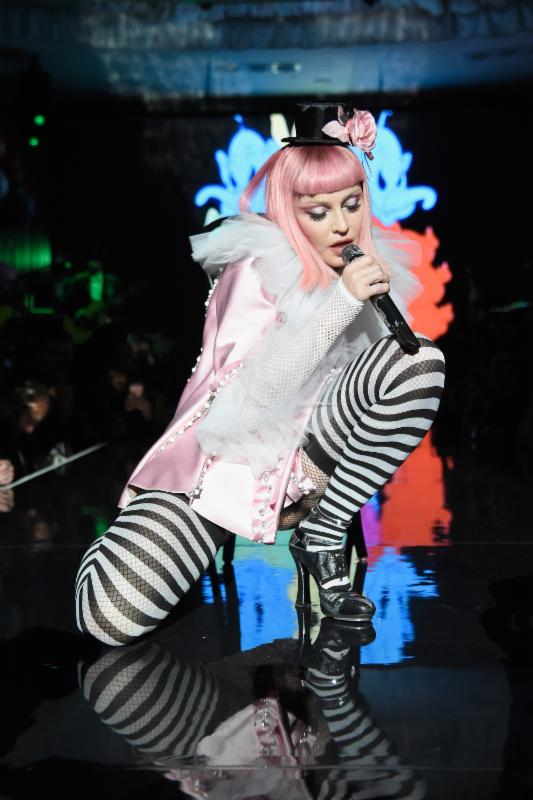 Madonna's evening of music, art, mischief and performance raised over 7.5 million dollars for the superstar's Raising Malawi foundation during Art Basel on Friday, December 2, 2016 at the Faena Forum in Miami Beach, FL.   The evening was made possible thanks to support from MDNA Skin, BVLGARI and Perrier Jouet.

James Corden, host of Late Late Show, served as the Master of Ceremonies and Milutin Gatsby was Fundraising Chairman for benefit evening.  Pierre Dolmans curated the art auction with special thanks to Lisa Schiff.

Madonna performed 10 songs, including a cover of Britney Spears' "Toxic" and a stripped-down version of "Holiday," and was supported by her band, Kevin Antunes, Ric'key Pageot, and Monte Pittman and background vocalists Kiley Dean and Nicki Richards.  Her hair was by Andy LeCompte, her makeup by Aaron Henrikson, and her costume design by Arianne Phillips. Set design was by Stufish.

Additionally, guests bid on a trip with Madonna to visit Malawi for the opening of the new Mercy James Institute for Pediatric Surgery and Intensive Care, a portrait session with famed photography duo Mert Alas and Marcus Piggott, as well as the Jeremy Scott for Moschino in collaboration with Rebel Heart Tour Costume Designer Arianne Phillips dress worn by Madonna on the Rebel Heart Tour, which Ariana Grande modeled on stage, dancing alongside Madonna. Sean Penn made an appearance on stage, as well, to help auction off three photos from his and Madonna's 1985 wedding, photographed by Herb Ritts.

All proceeds from the evening will benefit Raising Malawi, the non-profit organization founded by Madonna in 2006 as it works to build Malawi's first pediatric surgery and intensive care unit.  The new facility, to be named the Mercy James Institute of Pediatric Surgery and Intensive Care, is set to open in 2017 and will double the number of life-saving surgeries performed on children each year, provide intensive care after critical surgeries, and train specialized Malawian medical staff. In a country with only four pediatric surgeons and where 50% of the population is under the age of 15, this new facility will transform the lives of Malawian children.