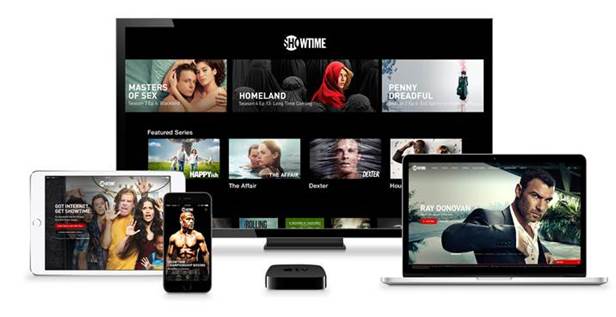 For the first time ever, SHOWTIME will be offered over the internet as a stand-alone streaming service launching in early July, with Apple as its first partner. The stand-alone service will be called SHOWTIME, a brand already embraced by consumers as the home for cutting-edge original programming, sports and movies. The launch of SHOWTIME will coincide with the new seasons of the critically-acclaimed, hit series RAY DONOVAN and MASTERS OF SEX, premiering on Sunday, July 12th.

iPhone®, iPad®, iPod touch® and Apple TV® users will be able to subscribe to SHOWTIME as a stand-alone service on the SHOWTIME app anywhere in the U.S., for one monthly price ($10.99) to view on all Apple devices. To learn more about SHOWTIME, watch and share: http://s.sho.com/1FTryf8. Additional platforms and providers will be announced soon. The announcement was made today by Leslie Moonves, CBS Corporation's President and Chief Executive Officer, and Matthew C. Blank, Chairman and CEO, Showtime Networks Inc.

Subscribers will have unlimited on demand access to every season of award-winning SHOWTIME original series, and hundreds of hours of movies, documentary and sports programming, as well as the live broadcast of the east and west coast feeds of SHOWTIME. Showtime will offer a 30-day free trial to new customers who sign up through Apple in July. Apple users simply need to go to the SHOWTIME app on their device to sign up and create a SHOWTIME account.  Subscribers can use their SHOWTIME account to watch the service across all supported devices, as well as online at www.showtime.com.