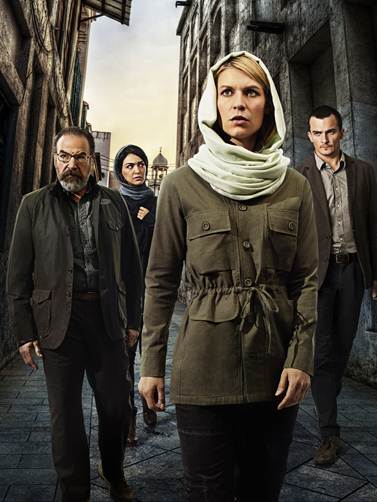 SHOWTIME is launching the first ever haptically-enabled video on mobile devices with technology company Immersion for the fourth season of the Emmy® and Golden Globe®-winning hit drama series "HOMELAND." The HOMELAND trailer is now available in the “Coming Soon” section on the SHOWTIME ANYTIME application on select Android devices. Once Android device users install the update, the video will offer a multi-layered sensory experience through the use of tactile feedback. As fans watch the trailer on their mobile devices, they experience nuanced haptic effects which are artfully authored, building suspense and immersing viewers into HOMELAND. For example, viewers can feel the tactile effects when a bomb explodes and sense the drama building with an orchestrated combination of sight, sound and touch. This marks the first time haptic technology has ever been used in a video on mobile devices. SHOWTIME is also the first-to-market in integrating this innovative technology through mobile advertising, encouraging deeper fan engagement and recall with paid media. The trailer will be available leading up to the highly-anticipated fourth season premiere of HOMELAND with two new back-to-back episodes airing on Sunday, October 5 at 9 p.m. ET/PT.

This season, Carrie Mathison (Emmy, SAG® and Golden Globe winner Claire Danes) is assigned to a new post, Chief of Station at the US Embassy in Islamabad, Pakistan. On the front lines of the war on terror, she is tasked with protecting US interests in the region from forces within the Taliban. Her mission pulls her into the complex dichotomy between international diplomacy and clandestine operations. HOMELAND also stars Emmy and Tony® Award winner Mandy Patinkin, Emmy nominee Rupert Friend, Nazanin Boniadi, Tracy Letts and joining the cast of series regulars this season will be Laila Robins.  Guest stars include Suraj Sharma, Raza Jaffrey, Sarita Choudhury, Michael O’ Keefe, F. Murray Abraham and Corey Stoll. Produced by Fox 21, the series was developed for American television by Alex Gansa and Howard Gordon, and based on the original Israeli series Prisoners of War by Gideon Raff.  Along with Gansa, Gordon and Raff, the executive producers for season four are Alexander Cary, Chip Johannessen, Lesli Linka Glatter, Meredith Stiehm, Avi Nir and Ran Telem.

Television
Netflix Around The World: Launches In Belgium, France, Etc.