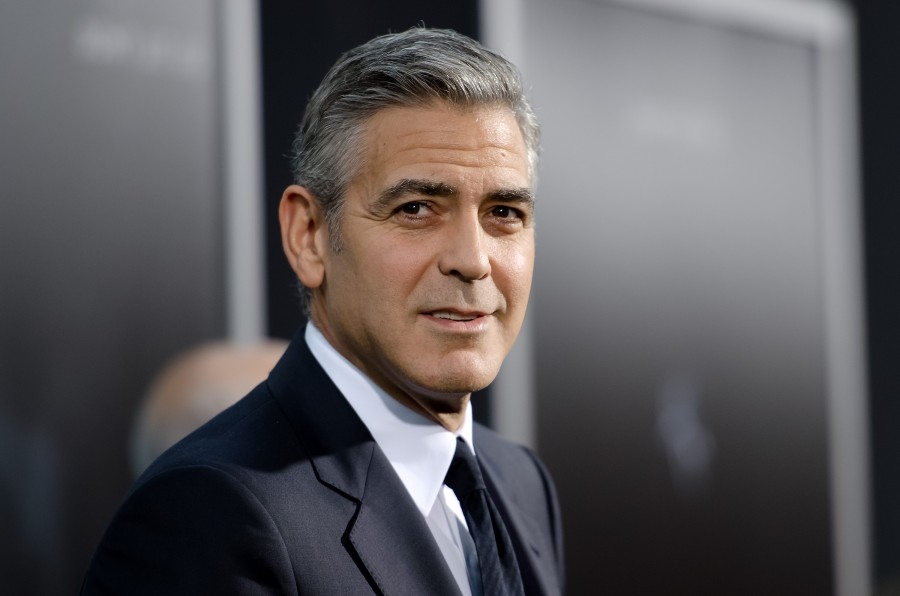 Theo Kingma, President of the Hollywood Foreign Press Association (HFPA), made the announcement of Clooney’s honor.  Kingma stated, “The HFPA is honored to bestow the Cecil B. DeMille Award to George Clooney to celebrate his outstanding contributions both in front of and behind the camera.”

Chosen by the HFPA Board of Directors, the Cecil B. DeMille Award is given annually to the talented individuals who have made an incredible impact on the world of entertainment. Recent recipients include Woody Allen (2014), Jodie Foster (2013), Morgan Freeman, (2012), Robert De Niro (2011), Martin Scorsese (2010), Steven Spielberg (2009), Warren Beatty (2007), Anthony Hopkins (2006), Robin Williams (2005), Michael Douglas (2004), Gene Hackman (2003), Harrison Ford (2002), Al Pacino (2001), and Barbra Streisand (2000).
Clooney’s achievements as a performer and a filmmaker have earned him twelve Golden Globe® Award nominations in nine categories. He’s also won two Academy Awards and has been nominated in six different categories, which earned him a special spot in the Oscar record books as being nominated in more categories than anyone else in Oscar history. In addition to receiving four Emmy nominations in three categories, Clooney is the recipient of four SAG Awards, one BAFTA award, two Critics’ Choice Awards, and four National Board of Review Awards.

Through his production company Smokehouse, Clooney most recently produced, directed and starred in “The Monuments Men” for Sony Pictures. In addition to starring in the upcoming Brad Bird sci-fi film “Tomorrowland,” Clooney will begin filming the Coen brothers’ film “Hail Ceasar!” set for release in 2015 by Universal Pictures.

Clooney is recognized as much for his global humanitarian efforts as he is for his accomplishments in the entertainment industry. In 2006, Clooney and his father Nick went to drought-stricken Darfur, Africa to film the documentary “Journey to Darfur.”  Clooney’s work on behalf of Darfur relief led to his addressing the United Nations Security Council. In 2007, Clooney, Brad Pitt, Matt Damon, Don Cheadle and Jerry Weintraub founded “Not On Our Watch,” an organization whose mission is to focus global attention and resources to stop and prevent mass atrocities in Darfur.  Among the many honors received as a result of his humanitarian efforts in Darfur, one of them was the 2007 Peace Summit Award, given at the eighth World Summit of Nobel Peace Prize Laureates.

In 2008, Clooney was designated a U.N. Messenger of Peace, one of eight individuals chosen to advocate on behalf of the U.N. and its peacekeeping efforts. Two years later, Clooney, along with Joel Gallen and Tenth Planet Productions, produced the “Hope for Haiti Now!” telethon, raising more than $66 million. The Academy of Television Arts and Sciences awarded Clooney with the Bob Hope Humanitarian Award and later that year, Clooney received the Robert F. Kennedy Ripple of Hope Award for his dedication to humanitarian efforts in Sudan and Haiti. Clooney, along with the United Nations, Harvard University and Google, launched “The Satellite Sentinel Project,” an effort to monitor violence and human-rights violations between Southern and Northern Sudan. In March of 2012, Clooney was part of the delegation that peacefully demonstrated in front of the Sudanese Embassy in Washington, D.C., calling worldwide attention to the human-rights violations being committed in Sudan, which resulted in his arrest and in October of 2012, Clooney was the honoree at the Carousel of Hope Ball, benefitting the Children’s Diabetes Foundation and the Barbara Davis Center for Childhood Diabetes (BDC).

Produced by dick clark productions in association with the HFPA, the Golden Globe® Awards are viewed in more than 160 countries worldwide and are one of the few awards ceremonies to include both motion picture and television achievements.