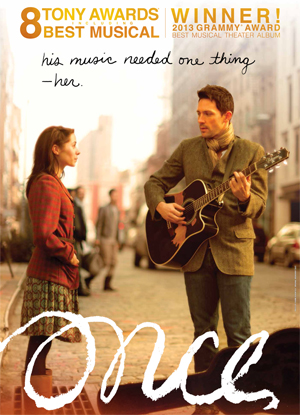 "Once," winner of eight Tony Awards including Best Musical and winner of the 2013 Grammy Award for Best Musical Theater Album, is celebrating its Hollywood Pantages Premiere with a limited four-week engagement; July 15 through August 10, 2014. Opening Night is Thursday, July 17th at 8pm.

"Once" is the celebrated new musical based on the Academy Award-winning film. The show features the Academy Award-winning music and lyrics of Glen Hansard and Markéta Irglová, a book by award-winning Irish playwright & screenwriter, Enda Walsh ("Penelope," "Hunger," "The New Electric Ballroom"), direction by the acclaimed Scottish director of "Black Watch," John Tiffany, movement by Steven Hoggett ("Black Watch," "American Idiot") and music supervision and orchestrations by Martin Lowe ("Mamma Mia!"). The set and costume design are by five time Tony Award winner Bob Crowley ("The Coast of Utopia," "Mary Poppins"), lighting design is by Tony winner Natasha Katz ("Aida," "The Coast of Utopia"), and sound design is by Clive Goodwin.

"Once" tells the story of an Irish musician and a Czech immigrant drawn together by their shared love of music. Over the course of one fateful week, their unexpected friendship and collaboration evolves into a powerful but complicated romance, heightened by the raw emotion of the songs they create together. Brought to the stage by an award-winning team of visionary artists and featuring an ensemble cast of gifted actor/musicians, ONCE is a musical celebration of life and love: thrilling in its originality, daring in its honesty... and unforgettable in every way

For tickets or more information about the Los Angeles engagement of "Once," please visit the official website for Hollywood Pantages Theatre, www.HollywoodPantages.com

FYI
"Pippin" Is Coming To The Pantages