Lenny Kravitz has announced the release of “The Chamber,” the first single off his highly anticipated tenth studio album Strut. The new album will be available for pre-order on iTunes starting, June 24th with "The Chamber" provided as an instant gratis track. In addition, the artist has released the album’s cover art, as well as exclusive album details including the track listing and a lyric video for “The Chamber,” which is premiering on Vevo today. Lenny Kravitz has also announced details of the first leg his world tour, which will kick off October 22nd in Moscow, Russia at Crocus City Hall. Tickets for the 40-city tour of Europe, the UK and Russia begin to go on sale starting on Friday, June 27th.

Kravitz’s tenth studio album Strut will be released on September 23rd, 2014 via Roxie Records/ Kobalt Label Services. The release’s twelve songs includes such titles as “New York City,” “I Never Want to Let You Down” and “She’s a Beast.” These songs wear their heart on their sleeve, and that’s the way Kravitz intended it. He’s had massive hits over the years and sold nearly forty million albums. Now is a perfect time to get to the heart of the matter.

“This record brought me back to a place of what I love so much about music,” Kravitz says, “back to the feelings I had when I was in high school. It’s a real rock & roll record – it’s raw, it’s got soul and it came together really quickly.”

As always, Kravitz plays guitar, bass, keyboards and drums and percussion on the album, and produced and arranged it as well. To provide the final defining touch on Strut, however, Kravitz called on the legendary Bob Clearmountain to mix the album (David Bowie’s Let’s Dance, the Rolling Stones’ Tattoo You and Bruce Springsteen’s Born in the U.S.A.)  The track listing for Strut is as follows: 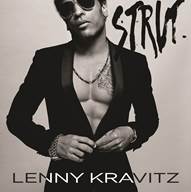 * Additional dates will be announced in the coming weeks

For more album and ticketing information go to http://www.lennykravitz.com/.

Lifestyle
Traveling to Brazil? Get Your Mobile City Guide With TripAdvisor

Music
Usher Releases New Single, "She Came To Give It To You" Featuring Nicki Minaj